This post I will be talking about yoga, my chosen form of cross training for the time being. However, before I get into that, I'd just like to preface this by saying a quick word.

The past two days I have felt every single muscle in my body scream like it never has before (or at least, not in years and years). I can feel discomfort in muscles I wasn't even aware I had. Don't get me wrong, I knew this would happen and I braced myself for it but it has still taken me a bit by surprise, especially in terms of which muscles hurt the most. Obviously my legs take top spot there (no surprises as they did the bulk of the work on Tuesday) but an unexpected second place goes to the tummy muscles. Who knew? Actually, I'm sure lots of people knew and will be shaking their heads in a "silly girl" sort of way but, like I said, I am a complete newbie and so I reserve the right for things like this to still take me by surprise! So basically, to recap, everything (still!) hurts. 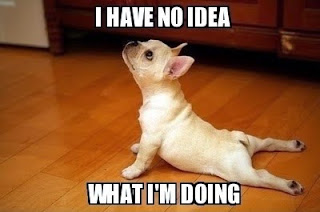 I chose yoga partly because for the time being I don't have a gym membership so gym-based activities/classes are out. I will eventually join a gym so I can take part in some of the fun classes my local one has on offer but for now, home-based activities are where it's at. The other reason for choosing yoga is because I have read that it is helpful for stretching out those post-run aches and pains and can help prevent running injuries. And, you know, the whole relaxing, achieving calm and serenity stuff, that too.

I thought I would just youtube a yoga video and that would be that but then I came across a website called Do Yoga With Me. There are hundreds of videos for different ability levels and different yoga styles, as well as for targeting different parts of the body and they are all lead by experienced instructors. I signed up (it's free) and downloaded a 6 week program for absolute beginners which included suggestions for which videos and tutorials to follow, as well as shorter classes if time is an issue. So far I'm feeling very guided.

The first video it suggested for me had some lovely calming music in the background and the man leading the exercises had a very soothing voice. It took me through some basic stretches from my arms to my upper body down to my hips. I have to say, while I certainly couldn't hold some of the stretches as long as the man could, I definitely feel much more relaxed and sort of looser in a way I can't quite describe. It was a very relaxing experience and I am actually looking forward to the next video this time next week. I may even squeeze in an extra session this weekend. Safe to say, I can see myself becoming a serious yoga convert!
Posted by Unknown at 17:46