I don't consider myself a real runner. Of course not, you'll say to yourselves, it's only been a month. But it's deeper than that. As a staunch non-runner throughout my life, I don't think I will ever see myself as a "real" runner.When I was at school I ran twice a week in PE class but that obviously doesn't count because that was enforced running. Real runners do it because they love it, or to lose weight or get fitter or for tons of other valid reasons. I am surrounded by lots of super fit running people. People who have been running for much longer than me, which somehow legitimises their "real runner" status. They belong to that club. Those people you see running down the road who don't look like they want to die, and who are clearly not having trouble pacing themselves and who definitely, definitely don't have to stop running every couple of minutes to walk for one minute. The people who eat all the right things know all the fancy stretches and muscle names.

Last week's setback definitely made getting back out there this week much harder and I don't think I've ever felt less motivated. Or less like a real runner. Real runners wouldn't struggle this much or take this long to bounce back. Then again maybe I'm just being too hard on myself. Still, the thought lingers in my head and I can't seem to shake it. 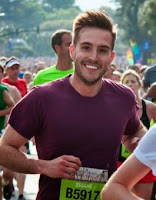 But you know what?

I'm ok with it. I don't think running will ever look good on me. I'm never going to be effortlessly running along, holding a conversation with a fellow running partner (who has that much leftover breath that they can just waste it like that?!). But I will be running. If I need to stop and walk every now and then to get there then that's fine too. Honestly, I would rather do that and not be a "real runner" than keep running non-stop and end up overdoing it or injuring myself.

Who knows? Maybe one day I will change my mind and think of myself as a real runner. But for now, I'm happy on the outside, in unreal-runner-land. Unreal-runner-land has doughnuts.
Posted by Unknown at 19:19