Run number two. After the first run's super uphill-ness I decided to change my route. I figure I should allow my legs some time to get used to the idea of running before I throw multiple hills at them. It's only polite. I managed to find a two mile route in my area that had minimal hills (zero hills is impossible I have found out) and while I was at it I created a similar three mile version for the next stage of my plan where my runs start getting longer.

Music in my ears and sun shining, off I went. This time I thought I had managed to pace myself a little better as I set off. I made a conscious effort to rein my stride in knowing I would thank myself later. I kept to my two minutes running/one minute walking strategy but as I got to around twenty minutes into the run I started really struggling. I started thinking that this run was feeling and taking way longer than the last one. I started wondering how I could be so much slower this time round when there were fewer hills to navigate! I was thinking I'm obviously just not cut out for this running business and why am I putting myself through it anyway? Nevertheless, I kept trudging on, feeling frustrated, for another eleven minutes until I got home. I went to log my workout, feeling quite upset and confused. Which is when I realised something.

I had accidentally run the three mile route, not the two mile one! 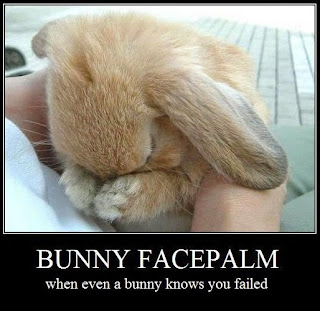 Pretty much sums up my feelings right now!

Granted, I took the teeniest of shortcuts on the way home so I actually ended up running 2.72 miles, not the full three but still, no wonder I was exhausted and it took so long! I feel silly for not having realised that I had been running for almost a whole extra mile but at the same time quite surprised that I had managed to keep going at all. I did it in exactly 31 minutes which, I have to say, I am quite proud of. Compared to today, this Sunday's two miler should fly by! Hopefully.
Posted by Unknown at 18:06