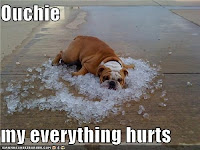 No, I am not talking about spinning. I have now done two spin classes and while they are tough, they are bearable. No, I am talking about a brand new evil. One I had no knowledge of until this Tuesday.

Normally Tuesday is my run club day. A nice gentle 4K run around my town with some like-minded ladies. I look forward to my Tuesday runs. This Tuesday however was miserably wet and cold and resulted in the class being cancelled. The lady who runs the club suggested that those who still wanted a workout should come along to the cryptically named "team training" class that evening. I asked her what this class involved and she told me it was a fun class with a bit of spinning and something she called "circuit training". Some of you may already see where this is going. I, however, had never heard of circuit training and was told it was "just a bit of step" and that I would manage fine.

HA. (I would laugh harder but my abs still hurt.)

Those 45 minutes were the longest, most painful, movement-packed I think I have ever lived through. There were weights (the really heavy green ones, not the pretty pink light ones I use during the "tone" part of spinning), sit ups, press ups, planks and about a zillion squats. Add to that the sprinting on the bicycles and the jogging/bunny hopping on and off a step and I honestly didn't know which way was up. Oh and we did some suicide runs as well at the end, you know, cause we had loads of extra energy left over.

I don't think I have ever sweat so much in my life (ladylike, I know). I woke up the next day and every single muscle (every. single. one.) was on fire. Muscles I haven't felt in years were suddenly screaming at me and I wasn't even moving, I was just sat (collapsed in a heap) helplessly on the sofa. I'm still hobbling about today. Two whole days later and I'm still sore!

I'll tell you one thing, that is the last time I ever get lured into a class on the promise of it being fun and easy. The next person to come near me with the words "circuit training" will get a big punch on the nose. Or at least they will once I can actually lift my arms up past my waist again!