The big day has finally arrived. I went to bed last night thinking I'd actually manage to get a decent amount of sleep. Ha. Of course last night would be the night a thunderstorm decided to come rolling on through. Don't get me wrong, with the heat we have been having recently I'm glad it happened. I just wish it could have happened when I wasn't trying to sleep. Anyway. I got to Hampstead Heath an hour before the race (which is what the organisers say you're supposed to do) and found there was absolutely no point in me getting there that early and I could have had an extra hour's sleep instead. Never mind. It was a gorgeous day today which was both a blessing and a curse. Blessing because it's always uplifting to see clear skies and feel the sunshine on your face, but curse because it was 26 degrees and humid so not ideal for running really. 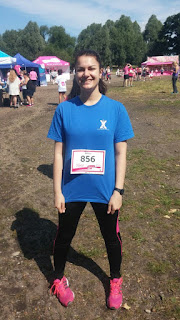 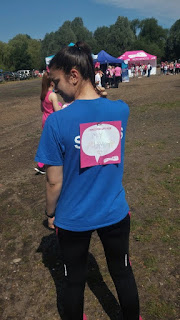 There I am before the race, still feeling fresh and showing off my number and sign at the back. Everyone else who was running today was over by the stage taking part in a group warm up but given the heat I figured the last thing I would want to do would be to stand in a large crowd under the beating sun and jump up and down for fifteen minutes so I gave it a miss.

The race started on time (to my surprise and the organisers' credit) and the 1000+ people all set off. There was no staggered start so it took about five minutes for me to even get past the start line and, once past it, another while for the crowd to thin enough for me to actually be able to run without trampling anyone.

Now, the description of the course on the website said there would be "a few hills and mostly tarmac surfaces". HA. Where it says "hills" read "small, extremely steep mountains" and for "tarmac" just substitute "the entire course was gravel or uneven woodland". To say I was unprepared is an understatement. I have been training almost exclusively on nice, smooth tarmac roads and, while on my usual route I have to navigate a few inclines, I have never come up against something quite like this. So that was frustrating. I tried to stick to the pace I had set for myself but soon found that I wasn't going to be able to keep this up and, much to my disappointment, I had to stop running and walk between Km2 and Km3. Still, the park is beautiful so I tried to  soak in my surroundings and the atmosphere instead of dwelling on how my plan had completely gone out the window. By the time I got to Km4 I had perked up a bit, felt less sorry for myself and managed to find my rhythm again. While kilometres 1-3 were out in the open under the beating sunshine, the final two kilometres, thankfully, were through the woods and thus in the shade. I could hear the crowd at the finish line as I passed the 4km marker and before I knew it I was passing a sign telling me I only had 500m to go. I felt like I had enough left in the tank to sprint the final 500m and it felt great to speed through the finish line within the time I had set for myself.

In all honesty today didn't go how I thought it would but, once again, I have nothing to blame but my over-inflated expectations. I didn't factor in the heat and how much all the unexpected hills would mess with my pace. Still, I made it in one piece, I wasn't the fastest by a long way (apparently the fastest person crossed the line in 23 minutes) but I also wasn't the slowest by a long way.

Overall I would say today has been a success and I'm very happy I did it. I probably won't be able to walk at all tomorrow but I am glad nonetheless.

Here I am looking decidedly less fresh post-race but I got a nice shiny medal for my efforts so I'm ok with that. 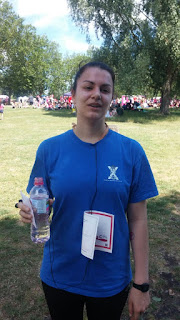 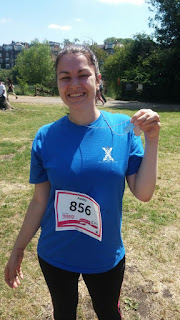 Last but not least, I would just like to say thank you so much to those of you who sponsored me. And now I'm going to go have a nap.
Posted by Unknown at 19:16